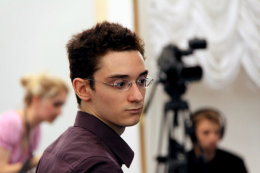 “I’m absolutely thrilled to be representing the United States again and working with the Chess Club and Scholastic Center of Saint Louis. I’d like to thank everybody who has made this possible, and I look forward to this exciting new partnership,” said Fabiano Caruana.”In addition, I want to take this opportunity to express my appreciation and gratitude for the support given to me over the past ten years by the Italian Chess Federation. I wish them all the best for the future.”

When complete, this change will unite Fabiano Caruana, who is ranked third in the world, with Hikaru Nakamura, the world’s fourth ranked player and Wesley So who is ninth, under the United States flag.

“The addition of Fabiano Caruana to the United States’ roster is historic. For the first time in history the United States will have three of the top ten players in world,” said Jean Hoffman, Executive Director of the USCF. “Over the past several years, we have made tremendous strides to increase the awareness of, and appreciation for, the great game of chess in the United States. The return of Fabiano to the USCF is another large step toward achieving our goals.”

Caruana hopes to compete in his first tournament as a United States player on the second leg of the Grand Chess Tour at the Sinquefield Cup in Saint Louis, Missouri. The Grand Chess Tour is a circuit of international events for the world’s best players. The 2015 Tour was created in partnership between the Chess Club and Scholastic Center of Saint Louis (Sinquefield Cup), Tower AS (Norway Chess 2015) and Chess Promotions, Ltd. (London Chess Classic).